It has been an interesting year for me here at Strike Models. This year I’ve really found that I am a much better engineer than craftsman. So, my solution for a problem is most likely going to be an engineering solution rather than a tweaking of the parts to get it to work. A major goal has been to make the kits easier to build, and thus lower the very high bar we have to entry into this sport. Since I have really only started building ships for myself this year, I am still novice enough to get into the same troubles as a new builder would. However, I know the components well enough that I can change them to make it easier. This novice/expert dichotomy is why I developed the integrated deck/sub-decks after realizing that installing the sub-decks was far more difficult than cutting the ribs. Cutting the ribs also got a lot easier with a vibrating cutting tool described in the blog section of our website (the Hood was cut in about an hour with very little flung dust).

I’ve made a number of recent changes to the kits we carry.

The Tennessee kit will be ready right after the New Year. The decks and turrets are already available. The styrene and foam decks as well as the masts and barrels ready to go. The USS Tennessee appears to be naval version of the Winchester Mystery House. There are so many half levels that it was quite interesting to stack the superstructure. You may have heard the saying that if you give a man a watch, he will always know what time it is. If you give him two watches, he will never be quite sure. It is far worse when you have several sets of plans. You are not sure which (if any) are correct, and at what time they were correct. The ships also seem to have undergone a number of small retrofits during WWII, so getting even two good pictures that showed the same details was interesting. The kit will be as close as I can make it to the late war USS California.

My new deck/sub-deck kits are available for over half of my hulls now (seven new sets get cut this week). The new deck style consists of a 1/4” thick sub-deck that is installed flush with the top of the fiberglass hull. This makes its installation significantly easier than trying to get it precisely 1/8” below the edge and generally strengthens the top edge. The deck is inlaid on a step cut in the sub-deck about 3/8” from the outside edge of the sub-deck so the tops of both are flush with each other and the top of the hull.

To make the sub-decks, I used our hulls (taped to proper scale width) and traced the hull to make the sub deck pattern. Only some sanding should be needed (mostly in the bow) to get the sub-deck to conform to the inside contours of the fiberglass hull. This will vary from ship to ship, but is much faster than previous methods. If a deck kit is listed for the hull, it is for the new style of decks. The decks were cut with a CNC router, so it is possible to get multiple identical decks (useful for when you want a show deck and a battle deck). 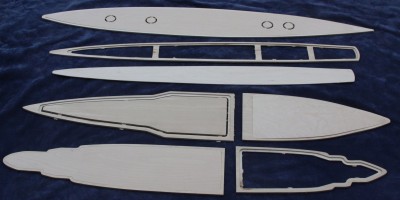 Regulators have been an interesting issue this year. I ran my supplier out of fixed pressure bodies in September, with the understanding that I could still purchase variable regulators while arraignments were made to get another fixed body. When I picked up the last fixed regulators, I was told I could no longer purchase the variable regulators either. Then I was informed that I could purchase a newer variable version for only an extra 50% in cost, an eight week lead time, and a very significant minimum order. The relationship did not go well from there. I am supporting the regulators and am getting a batch of rebuild kits, but I am unlikely to purchase more from the company.

I believe I’ve found another regulator that will work well for warship combat. The new regulator is a paintball regulator that is being customized to work better for us. The new regulator will be similar to the one shown below of the left, but without the port on the top (it will have a side port). The regulator is a two-stage regulator with an integrated on/off valve (the lower knob). It will have a 1/8 NPT port on the side and most likely have an integrated pressure relief valve. It is a little bulkier and heavier than the last regulators I had, but the on/off valve makes up for a lot. You will be able to use the much more common pin valves on tanks, which will save weight (2.7 oz) and length. I’m working with the manufacturer to up the flow a little, and we are hoping to have the batch to me by the end of February. 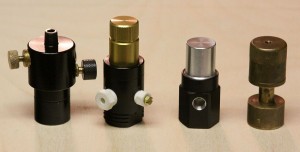 I have a number of new turrets coming out. Below are pictures of the new masters for the Agano (primary, secondary, and torpedo), Le Fantasque, HMS Kent/Canarias, and Alaska. I also have a 4.5 square inch rudder that I am testing. All of these were rapid prototyped. The Alaska turrets were based off of the best photos I could find because every set of plans I found were verifiably wrong when it came to the rangefinders. 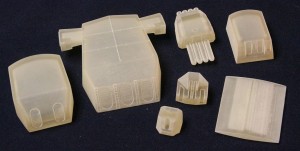 Another project that I had been working on is an integrated firing board for solenoids. The version I brought to the SE Regionals) had programming problems and had to be tossed. The new boards are in and the parts to populate them are in transit to me. The boards control two solenoids each (forward and back), are optically isolated, and support about 25 amps per channel. The flyback diodes are integrated, so no need to worry about those with the solenoids.

Solenoid Driver Board, still panelized before populating and cutting apart.

I made versions of the solenoid firing board that have firing rate enforcement (designed for Treaty and big gun) plus a version that offers firing rate enforcement for servo-based firing systems. The time delays are not user modifiable, so they will be marked on the servo leads. A useful quirk of these boards is that if the gun is commanded to fire continuously, the gun will fire at the delay interval.

My new Montana plug is going in for the last checkup before being molded. The USS Montana was ordered and parts were built, but it was never laid down.

The big gun cannons are undergoing another redesign. The base pieces were taking far too much time to machine. The new design looks much easier to design, though it will be a little less gas efficient.

By popular request, Strike Models now has gift certificates. Please contact us by email or phone for details or to order.

Strike Models will begin carrying a selection of the Grey Wolf Squadron line of turrets and accessories right after New Year.

I just got my first plastic injection mold running. The mold makes interrupter pins (by the dozen). This will make consistent parts that will not need to be remanufactured. I will soon make new pumps now that the inject mold is running.

I know this is long, but we have been busy this year and plan to be even more so next. We always welcome any feedback you have about our products, and suggestions for changes and improvements. Thank you for supporting us as we continue to ramp up production and new products.