The first batch of pre-orders are nearing completion. Due to setup times, these cannons need to be made in batches, so the next production run will not happen until after the 2017 IRC NATS as well as time to get a little feedback on the initial units.


Prices include the valve necessary to fire the cannon.

We have every expectation of shipping them in February 2017 shortly after our January shutdown. The design is a negative pressure type using an aluminum accumulator. This accumulator is 5.5 inches long and 1.25 inches tall. The top of the magazine is a little under 3 inches above the base of the accumulator. Here is a drawing that can be used for a fit check: 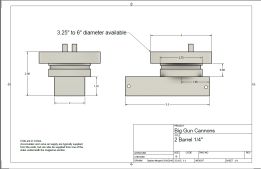 The test cannon pictured below has almost all of the updated features that will go into the new version, but not all of the parts were finished so as to get to testing faster (like the final version will not have a square plate under the magazine and the lid of the magazine will be secured). The features that are not on that cannon are ones that we have built before in earlier prototypes, so we are not expecting problems incorporating them. The unloaded assembly below weighed in at 1.9 lbs. The final version will be close to this weight. 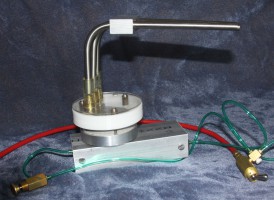 We know that there are additional versions that are desired in this hobby, and that these will not fit in every ship. Our thought was to get these highly desired versions out for the ships that can use them and finish the other versions at a later date. The big gun community has been without a reliable source of cannons for far too long, as these cannons have proved tricky to safely and economically produce. Part of the reason that BDE stopped making cannons was that their part price tripled for many of the components. Earlier in 2016, Strike Models purchased an older, large CNC machine on which we will be producing the parts.

The reason for the pre-order is that we need to find out how sets are needed for these sizes, plus tooling will need to be purchased for a production run. There are also a couple of parts with a longer lead time when needed in more that single quantity. During the January shutdown, a small amount of maintenance needs to be done on the CNC machine and chip guards added (machining out the accumulators throws aluminum chips EVERYWHERE).

Safety has been a driving factor in both the design and setbacks in getting these cannons into production. As someone who has personally had a set of PVC big gun cannons perform a rapid unscheduled disassembly with my face about a foot from the starting point, I can assure you that I do not want that to happen to anyone else. In that case it was a PVC glue failure in the accumulator. Another cannon merely launched the magazine when it was being tested at the water’s edge (and I was again right next to it). Both of these instances occurred long before I started designing cannons myself, but they definitely had an impact on the future designs. For starters, the accumulator is designed to be in a safe stress state (known as the yield stress) at more than double the the pressure at which the tubing leading up to it will burst. High pressure testing will also be done before shipping.

The entire cannon can be quickly disassembled, but it is recommended that the bearing not be unless you really need to. The bearing consists of contained delrin balls held between the base of the magazine and the accumulator. Here is a breakdown of the cannon: 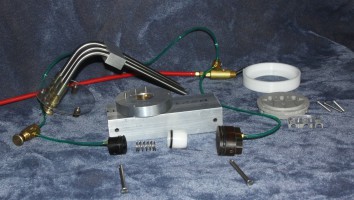 There has been some concern about this being a form of a negative pressure cannon and being able to make it safe. By separating the main fill and the actuator exhaust, draining the system does not cause it to fire because the accumulator and actuator can be kept at equal pressure.

Strike Models is selling John C White’s Weapons Manual #1 and his plans for a Rotating Gun System. After going over the plans, we do recommend making some changes to both versions, which is why they are not immediately available for purchase. Please email us for details. Issues with both have to do with using glued PVC pipe connections.