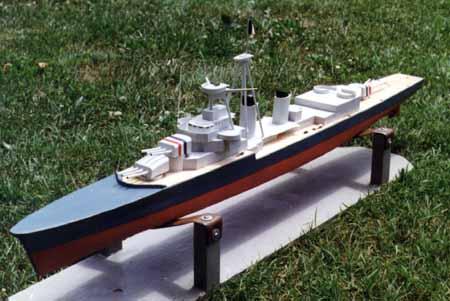 The French Navy’s La Galissonnière class light cruisers were among the best in Europe during the years leading up to World Ware II. Highly regarded for their armament, armor, and speed, they were also a very handsome looking class of warship. Three of the class were scuttled by the Vichy French to avoid capture by the Axis, the remaining three served the Free French throughout the war and on into the 1950s and 60s.

A light and fast model, these small ships are highly respected and used by many experienced battlers. If properly captained, they have proven capable of doing considerable damage to opponents and, having fairly low freeboard aft, seem very hard to hit.

Skills Required
Building: Building: Intermediate, special concern must be given to max. allowed weight and internal space for components. Due to this ships small size, no radio box is supplied. The radio must be waterproofed as per current R/C Combat techniques.
Battling: Rookie to Intermediate