The new decks now have the turret hole cutouts (not available when this picture was taken).

The first of their kind, the HMS Invincible class ships were the beginning of First Sea Lord Sir Jackie Fisher’s daunted “battle-cruisers”, ships that had the armament of a battleship, but sacrificed the weight of heavy armor to give them the speed of a cruiser. Though plagued with problems when facing enemy battleships at Jutland, when used for their original design purpose as “cruiser killers”, British battle-cruisers did the Royal Navy proud. The HMS Invincible and HMS Inflexible sank the German armored cruisers Scharnhorst and Gneisnau at the Battle of the Falkland Islands on Dec. 7, 1914.

A short, stubby hull and twin rudders give the Invincible very good maneuverability. Being a Class 4 ship, it is also allowed to utilize broadside firing BB cannons. A real killer in a close in skirmish with the Axis.

HMS Invincible is available as a complete fiberglass kit, and as hull only. 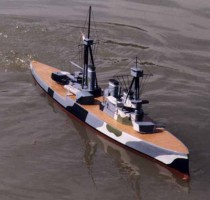 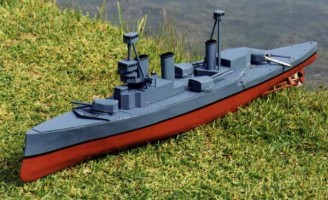