Prior to WWI the Imperial Japanese Navy requested from the Vickers yard in Great Britain a battlecruiser that excelled all other battleships then afloat or building in terms of speed and armor. The very successful design led to the Japanese building three further copies in their own yards. All four of the class were fully modernized during the 1920’s and reclassified as battleships. They were further modernized and lengthened during the 1930’s.

The Kongo class all served the Japanese Navy well into WWII. The Hiei and Kirishima were both sunk by U.S. forces in the battles around Guadalcanal during November 1942. The Kongo was torpedoed and sunk by US submarine Sealion in November 1944. The Haruna was sunk in port by a US air raid early in 1945.

The IJN Kongo class battlecruisers have been popular ships in the R/C Warship Combat hobby for some time. Performance on the water consists of good speed and very decent maneuverability. Four main armament turrets allow for several good options in outfitting the ships for battle.

We are making the IJN Kongo class available as a fiberglass hull shell only. Sometime soon we hope to be have molds made so that we may offer resin molded main turrets as well. As with all of our model kits and hulls, we can outfit a Kongo with all the needed running hardware, BB cannons, CO2 equipment, and bilge pumps.

Skills Required
Building: Recommended only for those modelers with intermediate R/C building skills.
Battling: We recommend the Kongo as a good “second ship” or as a first ship only for someone with previous R/C building experience.

We have made two different versions of the Kongo decks, and we are not sure which one is actually better. Both versions have a solid nose section (though I can change that). Both major sections of sub-decks are permanently mounted to the hull and each other (inter-sub-deck pieces not currently included with deck kit). The upper sub-deck should allow sheeting all the way to the upper weather deck in one pass, though the inset casemate sections will still need to be dealt with. The big difference is access to the area underneath the catapult deck. Version A has a larger upper removable deck with narrower access underneath. Version B cuts off the aft end of the main weather deck and has it mounted permanently to a larger removable aft deck section. Version A would probably be easier to build but have less access. Version B would be a harder build (especially waterproofing both sections) but be easier to work on. For IRC and MWCI members, the Kongo will need to comply with casemate rules, so much of the lower sub-deck will need to be bevel sanded down to 1/8″ thickness. 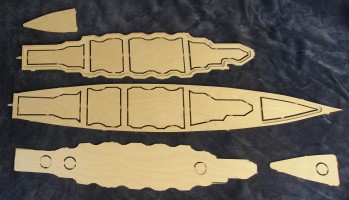 Kongo Deck structure A with the larger upper deck section. 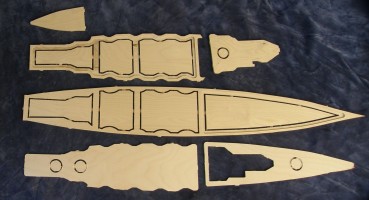 Kongo deck structure B with the easier access to under the catapult.