First of the U.S. Navy’s modern “treaty” battleships, the USS North Carolina class were the first U.S. battleships built with a flush deck and what became the standard main armament of three, triple barrel 16″ mounts. The two ships served the Navy well throughout WWII. The USS Washington has the distinction of being the only modern U.S. battleship to sink an enemy battleship, the IJN Kirishima at the night battle of Guadalcanal, on November 13-14, 1942.

Having good speed and excellent maneuverability potential, the North Carolina class is rapidly gaining in popularity within the R/C Model Warship Combat hobby. Among experienced Allied captains it is becoming touted as “The Ship” to build for taking on the Axis heavy hitters in a close in slugging match.

Skills Required
Building: Recommended only for those modelers with advanced R/C building skills.
Battling: The North Carolina is not for the rookie battler. We recommend it only for those Captains with at least one previous combat ship model and one full battling season under their belt. 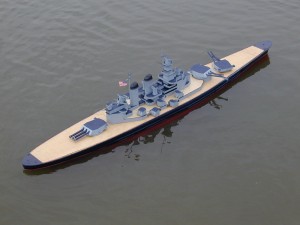