The USS Northampton class ships have always epitomized the classic “stepped deck” lines of the American “heavy” treaty cruisers. With the Pacific battleship fleet sunk at Pearl Harbor, cruisers were the largest ships in the US Naval inventory able to carry the war to the Japanese in 1942. This they did with distinction, from Midway, Java Sea, the Solomons and throughout the war.

The Northamptons are praised by rookies and experienced Captains alike as one of the best American cruisers that can be built for model warship combat.

Note: With the addition of the appropriate superstructure (the ship plans are available from Strike Models), our USS Northampton hull may be used to construct the USS Indianapolis/Portland class. 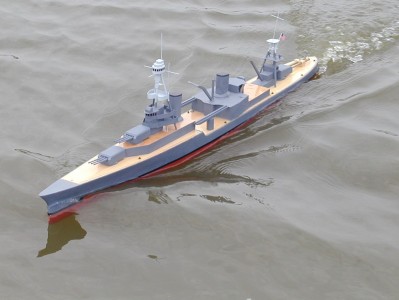