I just spend the day getting an ultrasonic welder put into my shop. After a month shipping delays from multiple pallet and forklift breakages, this 1500 pound beast drove up this morning. And a beast it continued to be, as the pallets underneath had separated and one had broken. The whole thing came on its side because of the original broken pallet had caused it to be let down on one side. So, after many hours of disassembly, I had the bottom cabinet, welding head, and upper cabinet (which was is pretty bad shape from shipping) all separated so I could put everything upright. All I needed was to re-attach the wheels to the bottom cabinet  so I could put everything back together and wheel it into place. Of course, I can only find two of the fixed feet and no wheels at all. Sigh… I also find out while taking everything apart that the head assembly is mostly 1 inch thick steel. I cannot even pick up one end of it. We have to use a fork lift just to move that one part in the evening (before the chance of rain).

So why do we need this beast of a machine? There are two different cannon systems that would benefit greatly from this machine. I have been working on a flat fast gun cannon for a while that could be mostly injection molded. With the cannon shown below (with a loose tolerance 4″ barrel) the cannon was shooting a very consistent 210 to 220 fps. Here is a picture of one:

The unit ends up being about half an inch thick and the tubing seen in the picture is replaced with internal routing. The only problem is that it needed to be either solvent bonded or ultrasonically welded. Solvent bonding can be finicky for this and hard to verify if it is done properly. With ultrasonic, the welds processes are well known and strong, but the upfront cost is significant. The second reason for getting the unit was being able to embed metal items into plastic. This ability clears up one of my last problems with the big gun cannons, so I’ll be testing that out as soon as I get power connected up to the ultrasonic welder.

We are getting new flags for people to pimp their boats with. The flags are 1 x 0.75 inches and are printed such that they can be wrapped around a flagpole or a wire and so be double sided. The flags are made from an artisans canvas and have a waterproof adhesive on the back to prevent them from fraying. The flags we have available right now (as soon as the glue dries, anyway) are:
48 star US
British White Ensign
Japanese Rising Sun
German Kriegsflagge and Reich war flag
Italy
France
Naval Ensign of Austria-Hungary (1918)
Spain 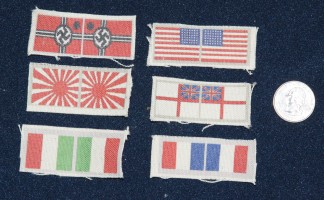 Ship Flags (not yet treated to prevent fraying)

We didn’t thing about at the time, but we will also be making four different versions of the Jolly Roger flags. These flags should be coming in over the next couple of weeks along with our new T shirts.
Calico Jack Rackham
Edward England
Richard Worley
Henry Every’s bloody Jolly Roger (red flags signify that no quarter would be given)
What we were not aware of until looking it up was that the Jolly Roger was used by several different navies in WWI and WWII, though mostly with subs. The British submarine force used them extensively, though at least one British surface ship listed her kills with silhouettes on a Jolly Roger.

Props:
For a while now, we have been wanting to change the way the props are put together. Since the Swampy days, they have been put together with a solder that had a little bit of silver in them (but it was not by any means a real silver solder). We picked up an electric furnace in February and have been working with a company that specializes in brazing. The current results are that we can silver solder the props but have not worked out the process to clean them properly (they need a chemical treatment as the wire wheel won’t take care of them). We will be transitioning from the standard solder to silver solder over the coming months. Since we expect that most people want the stronger solders, we’ll be including those where we can, though they are not quite as pretty yet. If they really need to be shiny, let us know and we can still solder the old way.

Previous post: Finding the Waterline of a New Model Ship